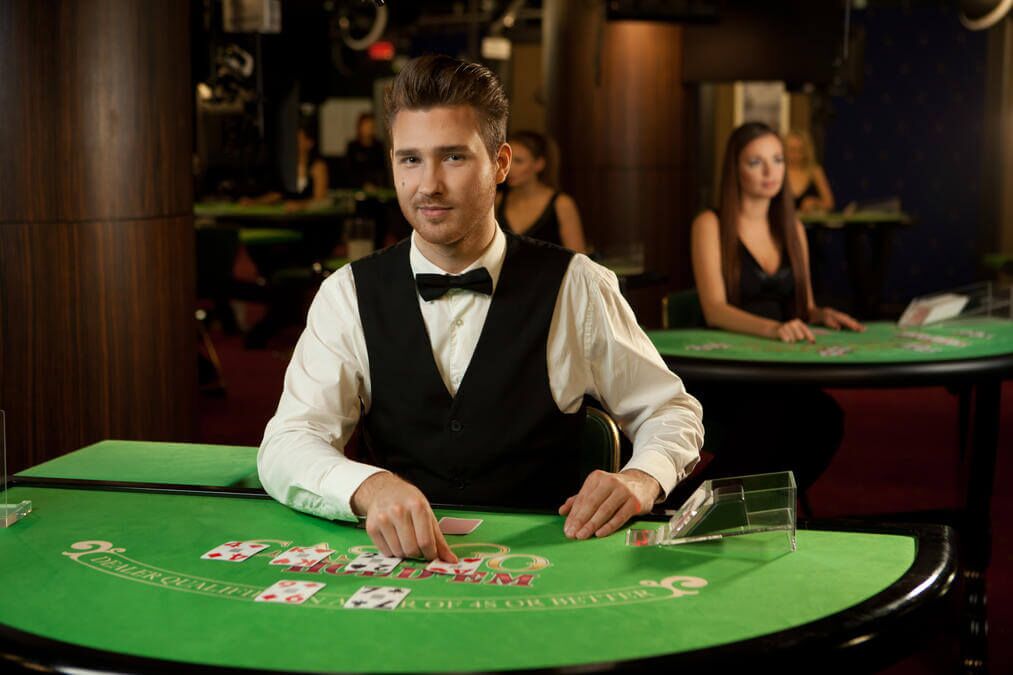 In the early 2000’s only a few States had legalized gambling, but now, after seeing how well they were doing economically, several more have followed. Most States have legalized gambling because they are confident it is a viable approach to achieving economic growth. Economic growth is just like any other growth; it needs to be fed in order for the progression to occur. The benefits contributed by casinos are some of the nutrients facilitating this growth. These benefits are:

In conjunction with the structure of a firm, personnel are required to run the company. Depending on how big the business is, a large sum of people is employed to provide the needed labor; right from the managerial rank to security, both graduates and the undergraduate get a chance of employment in a casino. Therefore, when people are employed hence getting an income that sustains them; it increases the productivity of that particular state which in turn leads to the growth of the economy. Statistics have shown that the number of people who have been employed directly in casinos to be 570,000 people who have also created nearly 200,000 jobs in the government. According to Sara Rayme (A senior vice president of public affairs for the American Gaming Association), the high number of employees casinos have offered made the industry more prominent than the airline companies. Moreover, the incredibly increased number of casinos in the various States has also made competition inevitable. Therefore, the intense competition has caused the States to remodify their policy to figure out how to still make an impact in the market.

2. Revenue obtained from the high taxation of casinos.

Acquiring of the permit plus all the legal documents required before starting a casino needs a lot of money. The cost of taxation is high because the business is viewed to be lucrative in a way the profits will be falling in as soon as the casino starts running. With that idea in mind, government officials have been raising the cost of taxation from time to time. Numbers don’t lie, if we look at the amount of cash that the government is cashing in from the casinos, you would be astonished. For instance, the revenues generated in the year of 2013 from casinos is $81 billion, this is apart from $30 billion that is generated from the Native American casinos. During that year, the amount of tax produced from the casino industry amounted to $38 billion.

However, apart from tax, the casinos have had an impact to the economy directly with $102 billion which is not inclusive of the cash spent by employees or else the effect would add up to $240 billion. Admittedly, we shouldn’t forget the amount paid in the construction and establishment of the casinos. Casinos also require equipment such as the surveillance cameras, slot machines and the specially designed tables for playing the cards. This equipment needs to be moved for the manufacturers to the location of the casino. The production and the moving of this equipment also need to adhere to the regulations set by guess who; the government of course. Here is a list of the top 13 states that have contributed most to the revenue obtained from gaming arranged in ascending from top to bottom:

Nevada casinos have gross revenue of $10.86 billion, and gaming and gambling in this state were legalized in the year 1931. Nevada has many towns that are flocking to casinos. The total number of casinos is approximately 265 casinos.

The state produces a total of $3.16 billion in revenue. Casino gambling in Pennsylvania were not long ago illegal – until 2004. It has 11 major casino outlets located all around the State.

Gambling and casino were legalized way too long ago in New Jersey. That is the year of 1976. The highlights of casinos in New Jersey are situated in Atlantic City which it solely contributes revenue almost equal to that produced from the whole of Pennsylvania. The state of New Jersey produces the net revenue of $3.05 Billion.

The state of Indiana has been experiencing competition from the states nearby like the Kansas and Ohio which has led to a deduction of 4% in the revenue. But still, the state has surprisingly managed to cough out revenue of $2.61 billion despite gambling being legalized two decades ago at around the year 1993.

In 2012, there was an opening of L’Auberge Casino Hotel in Baton Rouge which was a power-up to the revenue generated by the state. There are around 18 casinos located in the city of New Orleans. The total revenue Louisiana casinos generate is $2.40 Billion which is also a high number considering gaming was legalized in 1991.

Casinos in Mississippi face the challenge of flooding from Mississippi River. Nonetheless, this has not stopped gambling even though most casinos are at the docks of the river bank. After the recovery from floods has seen the state acquires revenue of $2.25 Billion. Gambling was made legal in the state of Mississippi in the year of 1990.

The State of New York is one of the highly taxed gaming State. Gambling was recently made legal in the year of 2001. The casino that is making headlines in New York is Empire Raceway in Yonkers which is seen as the money tree of the state. New York has managed to bag in revenue of $1.8 Billion.

In Missouri, gaming was also legalized almost two decades ago at around the year of 1993. Just like in the State of Indiana, the Missouri casino industry has also been experiencing competition from Kansas, a neighboring State. The compaction has reduced the impact of casinos on the economy by 2.2%. However, the state has been able to produce $1.77 billion in tax revenues.

The State of Illinois has seen visitors arriving in the various local areas hosting casinos. Around 16 million visitors go to Illinois yearly. Therefore, to keep attracting more visitors annually, the state has made efforts to place more casino establishments which have drastically increased the revenue by 10% in the year 2012. The state legalized gaming in 1990 and till then the recent revenue from taxes derived from casinos has been $1.64 billion.

The establishment of casinos in Iowa is on riverboats. There are around 18 riverboats hosting casinos in the state. Gaming in Iowa was legalized in the year 1989. The gross income of tax revenues in the state is $1.47 billion

The state of Michigan has only three casinos that have managed to produce a revenue net worth of $1.42 billion from taxes. Although the state is home to the Auto industry in Detroit, casinos seem to be the primary source of revenue for the state. Here casinos were made legal in 1996.

West Virginia is well known to be the home of Appalachian traditions and culture and also to be where the mining industry has been seen to be booming. On another note, the state also has five casinos which generate net revenue of $948 Million. The year that gaming was legalized in West Virginia is 1994.

The state has been doing more than alright in the economy sector. It has around 41 notable casinos that help the state to generate revenue of $766 Million. Gambling in casinos was officiated to be legal in 1990 in the State of Colorado.

3. The growth of sales in the retail

Casinos have recently known to attract visitors in a particular local area in a state. This periodical increase rate of population has led to more consumers buying the goods and paying for the services offered in the area. After all, the higher the demand means an increase in price which also affects the rate of production to be high. The retailers in around casino local areas have slightly reduced the cost of their products to attract more interest to the many new consumers in the area. The visitors mainly visit these cities for gambling or to some it is a form of vacation to them. Therefore, the visitors must need accommodation and food thus the need for a good hotel or motel. Although it is always phrased that the house always wins, once in a while some people win big in such casinos. These people probably spend part of their winnings or the whole loot in the same city they are in. With that much kind of money, the sales in the retail will undoubtedly increase.

The public funds offered by the government are not always enough to cover all the needs of the people in a particular state. This creates strain in the setting of a budget. Some sectors deem less important are left out in the budget. However, the bulk amount of revenue generated from casinos becomes useful in reducing this pressure. In every state that has casinos, the legislature of the state is generally in a dilemma of choosing between two options when making the law. That is whether to increase tax and get the maximum revenue in the present or create job opportunities in the future. The revenue acquired from a high tax is only able to solve the fiscal problem the government is facing currently thus that is always the goal when setting up the law. Although this approach may affect the employment rate later, the lawmakers are bound to be lenient on various occasions to satisfy the long-term economic needs of the people.

The Cons of casinos

As much as I would love to focus on the pros of having casinos in the society, it is evident how the same casinos have conned many people into losing almost everything important in their lives. For instance, some of the major loses the unsuccessful gamblers get from casinos are;

a) Lose money (the primary)

One of the rules of gambling is to be ready to lose the money you risk in a casino. Since the house is always destined to win, most people end up losing a lot of money. Mostly after the first few attempts, people who usually lose have the notion that luck would strike them and get win back the money they have lost plus profit.

b) Loss of jobs

Gambling can easily be a psychological problem, and the victim gets badly addicted. This addiction leads to people failing to appear at work in time and some, who have come to learn the tricks in a casino, have made gambling their source of income hence quitting their actual jobs.

After finishing all their money, some people go to full lengths of placing their properties, for instance, cars or houses as collateral in a bet and end up losing still.
Here is a list of the minor loses which have big consequences to a gambler’s life;

Casinos on the State’s perspective, has much significance in providing the necessities required for an economic growth of that particular state. However, on a personal perception, an individual has more to lose than to gain. Statistics truly show many people get to be employed from the establishment of casinos, but physical and psychological loses people go through after gambling is a scare to the personal economy of that individual which can be reflected to the economic growth of the state.