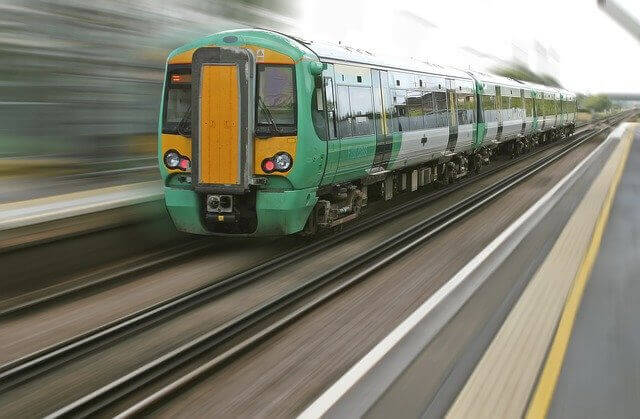 About one-third of all visitors to Las Vegas in pre COVID world were people from Southern California. Their number is bound to increase once the construction of the high-speed Los Angeles to Las Vegas rail finishes. When it’s going to happen?

Optimists believe by the end of the decade, which would probably be the case if the COVID-19 pandemic hadn’t delayed the start of its construction. But, with the pandemic slowly curbing down, it’s not crazy to expect the works to start this Spring – that’s exactly what Brightline West spokesperson said earlier this week.

The construction of the Los Angeles to Las Vegas rail is just one of the news concerning Nevada’s largest city. Another story from last week is that rumor has it that Hard Rock International is interested in buying two casinos on the Strip, namely Venetian and Palazzo.

West Coast, we’re coming for you.

Today, we were officially approved for tax-exempt bonds for our privately funded rail line between Las Vegas and Southern California. This means on track to break ground by end of this year. pic.twitter.com/1oVOY51Weo

The project was planned for years, with the first talks about a high-speed rail line connecting the two cities starting in the previous century. If it weren’t for the pandemic, the construction would’ve probably started earlier. With the delay, the costs increased, which put the future of the rail line at stake. However, last April, Brightline got an approval for tax-exempt bonds, which gave a lifeline to the project.

It’s estimated that the construction of the rail line is going to cost over $8 billion. It’s also estimated that it will take at least seven-eight years to complete. When finished, the line will connect the city of Victorville (in San Bernardino County) with Las Vegas.

According to the plans revealed by Brightline West, the rail line would have electric trains running every 45 minutes from one city to another. Each train would have a capacity of about 500 passengers, who would get to their destination in roughly hour and a half.

The Los Angeles to Las Vegas rail line would make travel way faster and way more convenient. In comparison, a car trip from Victorville to the Las Vegas Strip takes almost three hours. Those going by bus now need about four hours to reach their destination.

At the moment, the fastest way to get from Los Angeles to Las Vegas is airplane (~1:10). However, it’s also one of the most expensive means of transport – the Brightline West train is likely to cost much, much less than a plane ticket.

With the construction of Los Angeles–Las Vegas high-speed rail, a new era could start for the US gaming hub. However, it’s still a long way until the rail becomes a reality. A casino operator that believes Las Vegas has bight future ahead is Hard Rock International.

Owned by the Seminole Tribe of Florida, the company is reportedly interested in purchasing two iconic properties on the Las Vegas Strip – Venetian and Palazzo.

Both of these casino resorts are owned by Las Vegas Sands, the world’s largest casino operator. The company was founded in the 1980s by recently-deceased Sheldon Adelson. His heirs are rumored to be interested in offloading some of their properties.

Figured Venetian/Palazzo were out of reach for Seminoles, but rumor is Jim Allen, chairman of Hard Rock International, has expressed interest.

Rumor has it that the Sands might be wiling to sell the two casinos for a price in the ballpark of $6 billion. There aren’t many companies out there that have so much money to spend. One that does is Hard Rock International.

It’s speculated that the chairman of Hard Rock International, James F. Allen is very interested in reinstalling his company’s presence in Las Vegas. After selling the Hard Rock Hotel and Casino to Virgin Hotels, Hard Rock could be eager to make a big comeback to Nevada with the purchase of two Sands properties.

Nevada Casino Workers 4th in Line for the Vaccine

The state released its vaccination guidelines earlier this week. According to those, police officers are placed in the top of the essential workforce – that group is the first to receive the COVID-19 vaccine.

As per the guidelines, Nevada casino workers belong to the fourth category. At the moment, it’s unclear when their turn is going to come. About 302,000 Nevadans are involved with the casino industry. That’s almost 10% of the total population of the state (3.08 million).

On Wednesday, New Jersey Governor Phil Murphy renewed the COVID-19 regulations that have been in force in the state. The regulations will remain for another 30 days (at least).

What this means is that Atlantic City casinos will have to continue to operate under strict rules meant to prevent the spread of the coronavirus. Despite being praised for doing a good job, all of the nine casinos operating in New Jersey will have to keep their capacity at 25%.

New Jersey Governor, however, believes the end of the pandemic is near and that new President can turn things around. As a reminder, recently-inaugurated President Joe Biden, has a plan to distribute 100 million vaccines all over the United States in 100 days.

Massachusetts Gov. Charlie Baker has signed an order ending the nightly curfew that’s been in force since November 6. Starting Monday, January 25, venues in Massachusetts will no longer have to close at 9:30 pm.

This includes the three Massachusetts casinos – Encore Boston Harbor, MGM Springfield, and Plainridge Park. From now on, they can keep their doors open to casino lovers 24/7.

Things, however, aren’t yet back to normal entirely. There are some COVID-19 regulations that remain in place. For example, casinos will have to continue to operate at 25% capacity.