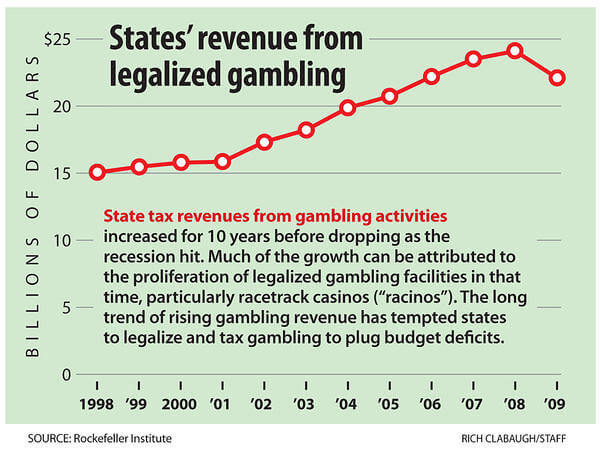 The Nelson A. Rockefeller Institute of Government in New York state recently published a study on New York gaming as a whole, which included casinos, lotteries, raceinos, and video gaming in the state. The report is likely to surprise both pro and anti casino advocates, as well as players in the state. In general, the report may be warning shot across the bow for every casino player. Here is the PDF.

For the anti-gambling groups, the good news is that states that have led the way in state-operated casino construction are bleeding red ink. The study shows that only in states where casinos have been recent built do states find themselves in the black. Regionally, only the geographic areas of the Southwest and Southeast parts of the country have turned positive. In contrast, if you are in the New England area you will be where casino revenues have plummeted. All this means that if you are an anti-casino advocate, you can seriously make the case that casinos are not a long term solution to state budget shortfalls. At best, it is only a stop gap measure.

On the flip side of the coin, pro-casino people can use the same data to make their case that when it is done right, state coffers are filled by casino taxes. Two states, Maryland and Pennsylvania, added $419 and $523 million respectively to state revenues in 2015. (As an aside, it is worth mentioning that the glut of Pennsylvania revenue is one reason for the current local political casino wars.) Clearly there are states whose attempt at using casinos to generate short term revenue has failed. But considering 2 of the 3 states that are on top of the loss leaders, Illinois and New Jersey, have state budget or casino problems that have less to do with state operated casinos and more to do with fiscal incompetence.

The report comes to the following conclusions, most of them apparently intended to promote anti-gaming rhetoric…

Gambling is NOT recession-proof

If the case was being made that gambling was recession proof, it was hard to hear from reasonable people. The original state lotteries were (allegedly) intended to increase funding to public schools. Then when the politicians found out how much money there was to be had, they took money from the General Fund and replaced it with the lottery revenue. When the recession did hit, there was no “extra” revenue because politicians got their hands on it. That has nothing to do with the local, state, or national economy – or at least should not have.

Gambling expansion brings in more revenue, until a saturation point is reached

This is true, but for many different reasons. For example, if residents flee a state because of government corruption or mismanagement, or higher taxes, the saturation point will be lowered because there are fewer people in the state, especially those with the incomes who are able to play the lotteries and go to the casinos. The study’s own data shows that states can lose money in recession or non-recession economic times, so what is the point here?

Some new revenue represents a shift, rather than net growth.

This is true, but at the same time an increase in state sales or property taxes that apply to every resident will qualify as “net growth.” So while people who choose to spend money on gaming accept a self-imposed “entertainment” tax and shift a part of their discretionary income to the state voluntarily, they are a problem? Or the presence of a system that promotes the increase of revenues is the problem?

Future growth in gambling revenue will not keep pace with tax revenue, or spending.

This conclusion is laughable. Of course, in the present political environment, is it reasonable for any American to expect that no matter how much money the average person pays in taxes the government will handle responsibly?

If gambling revenue is intended to support part of the overall budget, gaps may emerge in future years.

As was stated above, gambling revenues have been intended, not to “support” part of the budget but to be included as a key source of local and state revenues. It is amazing how the obvious can be overlooked when being an advocate against something.

Despite the conclusions, the report itself is worth a look where you can get some easy to read charts and graphs about the state of gaming in the United States. There are some states who are expanding their lottery and casino options as part of a long term plan based on a history of success. What can be overlooked amid the numbers is that casinos and lotteries are now highly competitive both in-state and across state lines. Residents of Nevada close to the California state line literally waited for 4 to 5 hours in lines as long as 3 miles to have a chance at the recent $900 million Powerball jackpot. (Nevada does not allow state lotteries in fear they will drain revenues from the casino industry.) From a business perspective, competition in the lottery and casino industry is good for the players – and bad for the anti-gambling advocates.