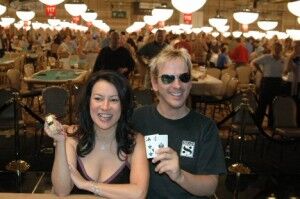 115 Hours Of Poker And Still Alive. One Man Took It Further Than Anyone For Charity

Could you imagine playing Poker for 155 hours; a little over 4 and a half days? Unless your a real card shark you would probably get sick to your stomach just thinking about sitting at a table for that long. After all, 115 hours? That is a lot of time and dedication.

Although many would not be able to accomplish this feat, actor and Poker pro Phil Laak did and earned his place in the Guinness Book of World Records. Phil Laak broke the world record for “Poker Endurance” after a 115 straight hours of  Texas Hold ‘Em. This feat gave him not only recognition for breaking a world record, but also gave many a new hope for humanity. Laak showed not only endurance but his huge heart by donating all of his winnings to a local children’s charity.

He broke the world record at a poker table at the Bellagio in Las Vegas, Nevada, the epicenter of casinos and gambling in America. He sat at the table for 115 hours, taking a five minute break every hour (these were taken out of the grand total time) allowing him only time to go to the bathroom and possibly grab a few bites of food. Everything else was done at the table during his games.

He played for four days straight with his girlfriend by his side, encouraging him every step of the way. With 115 hours under his belt he easily beat out the previous record holder, Paul Zimbler who had played for 78 hours straight. His original goal was to hit at least 80 hours but he simply kept going, making it nearly impossible for a challenger to ever break his record.

For Laak the idea of breaking a world record had been a childhood dream. He had picked up a world record book for the first time in elementary school and claims that flipping through the pages ignited a spark in him and a drive to have his name immortalized on those pages. His first attempt at record break was with a pogo stick. He jumped for a little over 10 minutes before he became exhausted. Knowing it was a record he was not meant to beat he moved on to trying to recite pi; the idea coming from his math teacher offering to allow anyone to skip the class if they could recite pi up to a specific number. After studying intensely for an entire weekend, Laak realized he had no hope at skipping his math class, let alone achieving the world record. However, this did not deter him from finding what he was meant to do.

The world record for poker endurance was a challenge he considered after playing a game with previous record holder Paul Zimbler. Laak was given the unique opportunity to speak to Zimbler about the experience, how he trained, and what kind of work it took to reach the 78 hour record. Zimbler willing gave Laak the information telling him how after 78 hours he could barely keep his eyes open and that he had been physically exhausted. Beating the 78 hour record was going to be a challenge, but Laak was inspired and he had his mind set, he was going to do it.

Laak set a personal goal of 80 hours, just enough time to break the record. He claimed that he saw it as an attainable goal and that he would achieve his personal goal of breaking a record, even if his time was beaten by someone else in the future. He surprised not only himself but everyone else when in June of 2010 he played for an astonishing 115 hours, a record that will nearly impossible for any future challenger to successfully beat. There is a great chance that Laak’s name will remain in the Book of World Records for years to come.

One of the heart melting aspects of this astounding story is that Laak played the poker marathon not for himself, but on behalf of Camp Sunshine, a local charity. Camp Sunshine is a program that allows children with disabilities and diseases to attend a summer camp, just like normal children. The difference is that a trained medical staff is available 24/7 to assist with any needs or possible complications that may arise.

Without this program, many children with disabilities would be unable to attend camp and lose the experience to retain some of what childhood is meant to be for the rest of their lives. Laak donated his $6,766 winnings to the program, but the actual donation was much more as throughout his poker marathon other players as well as spectators donated money to the cause as well. In fact, on day 2 of his non-stop play a friend of Laak’s offered a $1,000 donation if he dropped and did 30 push-ups; Laak did it adding more to his overall donation amount.

How it Went Down

Laak was surrounded by friends during the games, those who came to watch and those who also played. His girlfriend, Jennifer Tilly stood by him day after day, staying with him through the marathon session. His best friend Antonio Esfandiari was actually playing at the table when Laak officially broke the record.

Laak trained for six months before he set out to break the record and worked closely with a personal trainer and was given advice from proviso record holder Paul Zimbler who “pushed him to the limit” and made it possible for him to remain healthy and fit enough to pursue such a strenuous task. An enormous amount of effort was put into beating the record physically and mentally, and Laak said it was a journey he “wouldn’t want to do twice.”

Laak did it all with no stimulants of any kind. He took no illicit substance, drank no coffee, consumed no caffeine of any kind, and never once touched an energy drink. When he did eat and drink he stuck to his regular healthy diet, created by his trainer.

In the end, he had achieved his childhood dream, smashed a world record, and made it possible for disabled children to attend summer camp. Phil Laak still maintains a large amount of prestige in the poker community for his feat and his generosity. To this day he still enjoys the game as well as other casino table games, however, he claims that his days of “non-stop poker are over”.