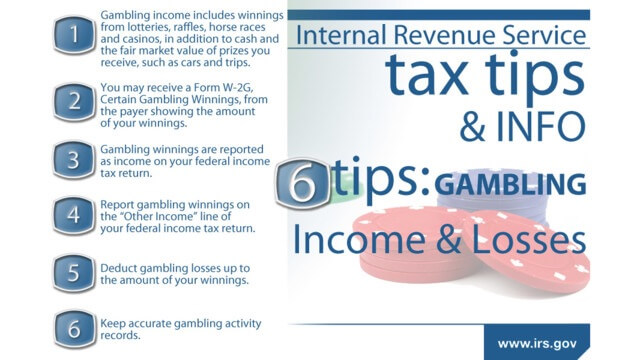 Members of the American Gaming Association (AGA), a pro-gaming group, are concerned about rumblings within the Internal Revenue Service (IRS). The IRS is suggesting a proposal which will reduce tax reporting thresholds for casino winners from $1200 to $600. If made official, the reporting will cover slot, keno and bingo winnings. The IRS is also considering whether the reporting thresholds should remain uniform across the board for slot, keno and bingo winnings.

Legal advocates for the gaming industry say none of this is necessary and will only increase an already over-burdened workload for gaming companies. Currently slot machines lock up when they hit $1200 jackpots or higher to call an attention dang to pay by hand. The machines remain locked until IRS forms are filled out and the game is reset. Lowering the threshold to $600 would increase machine shut downs and employee workloads, along with the additional customer paperwork.

Machine down time always reduces gaming revenues, and therefore tax revenues. Penn National Gaming Senior Vice President of Public Affairs Eric Schippers stated that, “If anything, the reporting threshold should be increased to reflect inflation.” He said, “Based on downtime estimates, the state [Massachusetts] could lose $31 million in revenue and $15.2 million a year in taxes.” If the proposal passes, the changes will affect all land-based, riverboat, racetrack and Indian casinos.

The IRS is taking public commentary on the subject. The Federal Register Notice of Proposed Rule Making and Notice of Public Hearing states “Written or electronic comments must be received by June 2, 2015.” The public hearing is scheduled for June 17, 2015 at 10 a.m. The AGA will issue commentary on behalf of the gaming industry.

In the meantime, presidential candidacies are hovering on the horizon. Potential candidates are already making the rounds to battleground states where gaming is a vital part of the economy. This includes nominating conventions in Philadelphia and Cleveland. Some Republican candidates have begun discussing their religious faith, including Rick Perry and Mike Huckabee.

Whether faith will collide with gaming’s economic benefits and potential future legislation is difficult to determine. However AGA President and CEO Geoff Freeman says the AGA will step forward now, “Our ‘Gaming Vote’ initiative will mobilize our workforce, highlight the path to middle class that our industry provides and emphasize our commitment to strengthening communities across the United States.”

The AGA will pronounce the “Gaming Vote” initiative by hosting local events in battleground states, including Iowa, Colorado, Florida, Nevada, Pennsylvania and Ohio. Other states may be added to the list. The AGA plans to encourage presidential candidates to review increasing regulatory burdens. Gaming in the United States is a $240 billion industry with 1.7 million jobs. The gaming industry currently generates $38 billion in local, state and federal tax revenues.