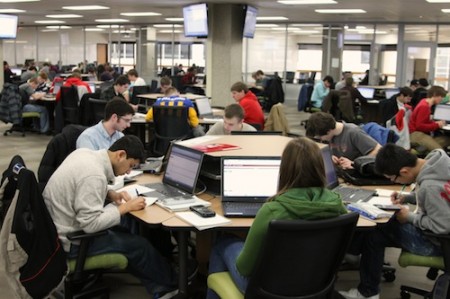 There is a battle brewing over the extremely lucrative, but controversial online gaming industry. Online gambling sites bring in over 30 billion dollars a year, but they also bring a host of problems too. Many in the industry are currently lobbying to have these sites banned. They are not regulated and are draining profits from the casinos. Now, a new problem connected to internet gambling is in the spotlight: the student gambling crisis.

Student gambling has become a major problem as a result of online gambling sites. Students in college dorms across America and Europe have become hooked on games of chance. Many don’t realize college is the perfect place for them feed their habit. Money is not an issue since students with student loans usually have excess funds that are reimbursed to them each semester, which can add up to thousands of dollars to gamble away. Since they can play in the privacy of their rooms unseen there are no fears of parents or anyone catching on. Age is not a problem since many sites don’t monitor it that strictly. The result is these kids are finding themselves addicted and in debt.

Some started gambling for fun, others tried it as a way to make money. Since they don’t have to travel, many of them sit at their computer for hours, losing thousands a day. Winning doesn’t help them because when they win large sums they just gamble it away. Gambling addiction can lead to stress, low self-esteem and drug and alcohol problems so they say. College kids have an uphill battle as it is trying to study and adjust to the real world with the same amount of social anxiety in the average student of that of an insane asylum inmate in the ’50s. It is a time for them to discover who they are, which is hard to do when gambling has a stranglehold on them, just like they said about drugs. It is an added outlet of pressure and distraction they don’t need, or is it just inexpensive entertainment for some?

Those in favor of internet casinos say these sites are responsible: they verify ID before letting anyone play and some even cut off players who owe a certain amount. They also point out that everything is done through the internet and those who enjoy gambling should have the luxury of playing from wherever they are. Some outright ban students altogether.

However, a lot of their claims of safety can be easily disputed, and they are truly available anywhere with mobile phones now able to be used to play for real money. There are many ways to thwart a computer system, as evidenced by all these underage gamblers. Also, you can stop a player from gambling if their debt is too high, but they can circumvent that by playing under somebody else’s name, like their roommate. In addition these sites are less likely to play by the rules since everything is done behind a screen instead of face-to-face like in an land-based casino.

This is why the current battle to outlaw these sites, led by casino billionaire Sheldon G. Adelson is such an important one. Under the Wire Act online gambling was deemed illegal years ago, but in 2011 the justice department allowed that individual states had the right to decide. These now legal USA online casinos are exactly what Mr. Adelson and other lobbyists want to close the knot on that loophole. The fact of the matter is that online gambling is an anonymous, faceless activity making it extremely difficult to monitor even if he succeeds.

Until a foolproof safety system can be put in place should congress honor Mr. Adelson’s request. Especially now when the future of our youth is in question? Personally I learned how to play blackjack and poker in college and it led to a great lucrative career so I am a bit biased.